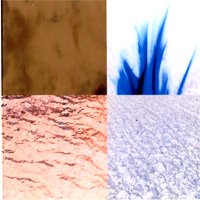 Des Slow has been in a number of bands over the years. In the past it was mainly dadaist performance groups and anarcho-punk.

Des Slow and The Stop Pills first formed in the grey suburbs of South East London in the late 80s, they recorded a couple of demos before Des decided to relocate to a Scottish Island with his family. In the early 90s Des moved to Kendal in Cumbria and aside from an occasional strum stopped making music.

A few years ago he started to make experimental sounds digitally. Elements is the first solo effort by Des Slow and was created by rendering html as sound and manipulating/editing it.

Des has recently been working with another Cumbrian sonic artist Still, to produce a CD of material entitled De Stijl.

Des is currently working on war ambient soundscapes and a concept CD focused on 'the red terror' of the 1970s and beyond. He welcomes any sonic contributions to either of these projects (and indeed any others that people feel inspired to collaborate on) - please contact his myspace web presence initially if you would like to get involved.